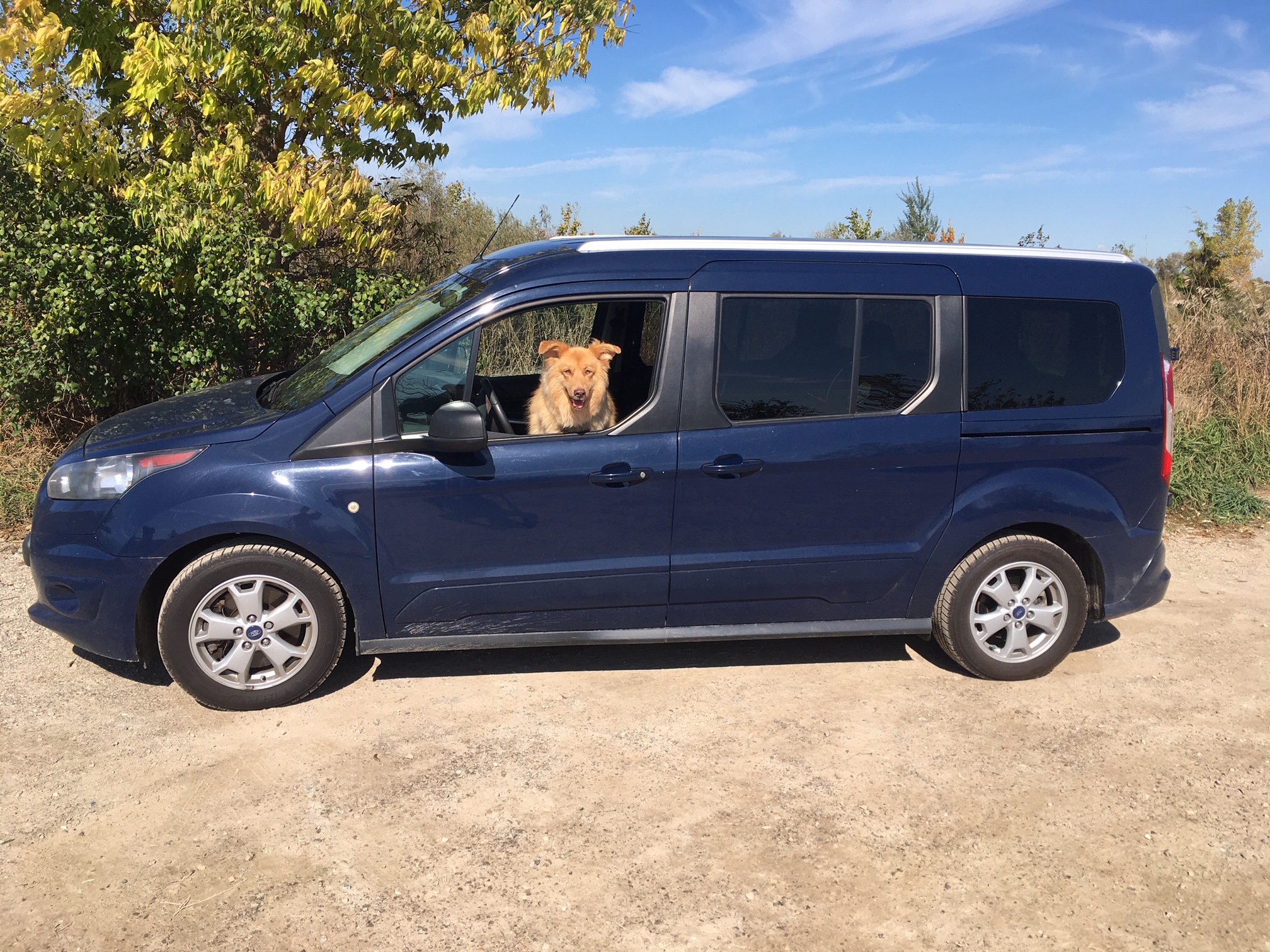 I recently purchased the Robert Wadlow of cars; the Ford Transit Connect Passenger Wagon. As far as vertical space goes, there is no other car that comes close to it. It is a true anomaly among automobiles. I previously wrote about how the Transit Connect makes a great car for tall people. But now that I actually own one, I can go into more detail. For reference, I’m 6’7″.

Tribute to the Honda Element

Before I get into detail on the Transit Connect, I’m compelled to give a quick tribute to the Honda Element that served me–and so many other tall people–so well over the years. The Element was introduced in 2003 as a utilitarian vehicle for outdoors enthusiasts with minimal emphasis on aerodynamics. This inadvertently lead to an unusual amount of vertical space, which pleased tall people (saved me from much back pain). But the average person just didn’t seem to get it. And so, like many other tall friendly vehicles (original Scion XB, Ford Flex, Ford B-Max), it was discontinued. That fateful day in 2011 was a sad one for us tall people.

The Unparalleled Vertical Space of the Transit Connect

In 2014, the ball dropped by Honda was picked up by Ford via a passenger version of their Transit Connect cargo van. Tall Clubs International was so pleased by it that they actually endorsed it! As far as I know, it is the only car endorsement they’ve ever made. To quantify just how spectacular this car is for tall people, I’ll use a measurement I like to call Vision Line Height (the vertical distance from footwell to the top of the windshield). Most cars are around 43″ or 44″. The Honda Element is an outlier at 46.5″. The Transit Connect is a whopping 50″! 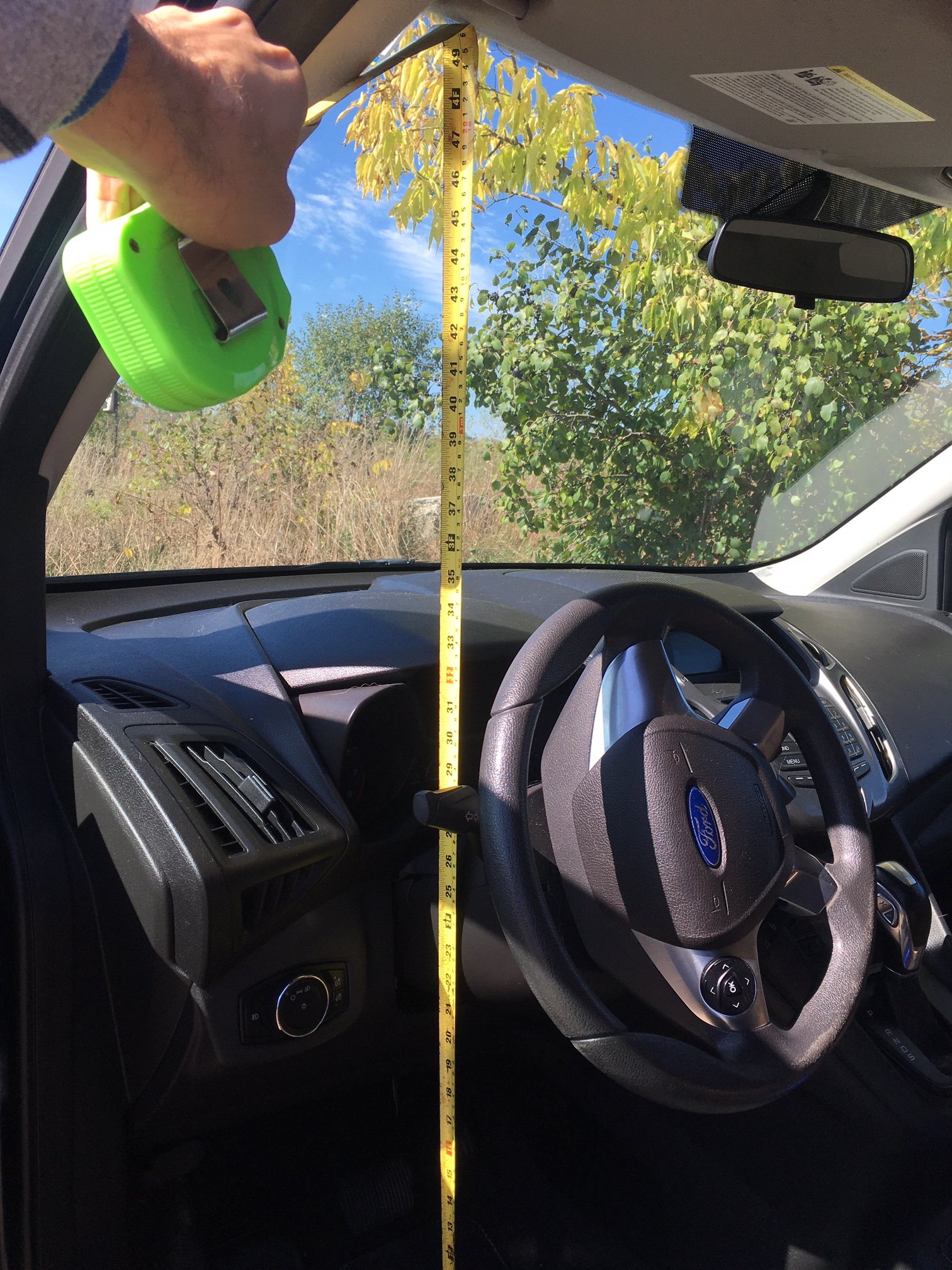 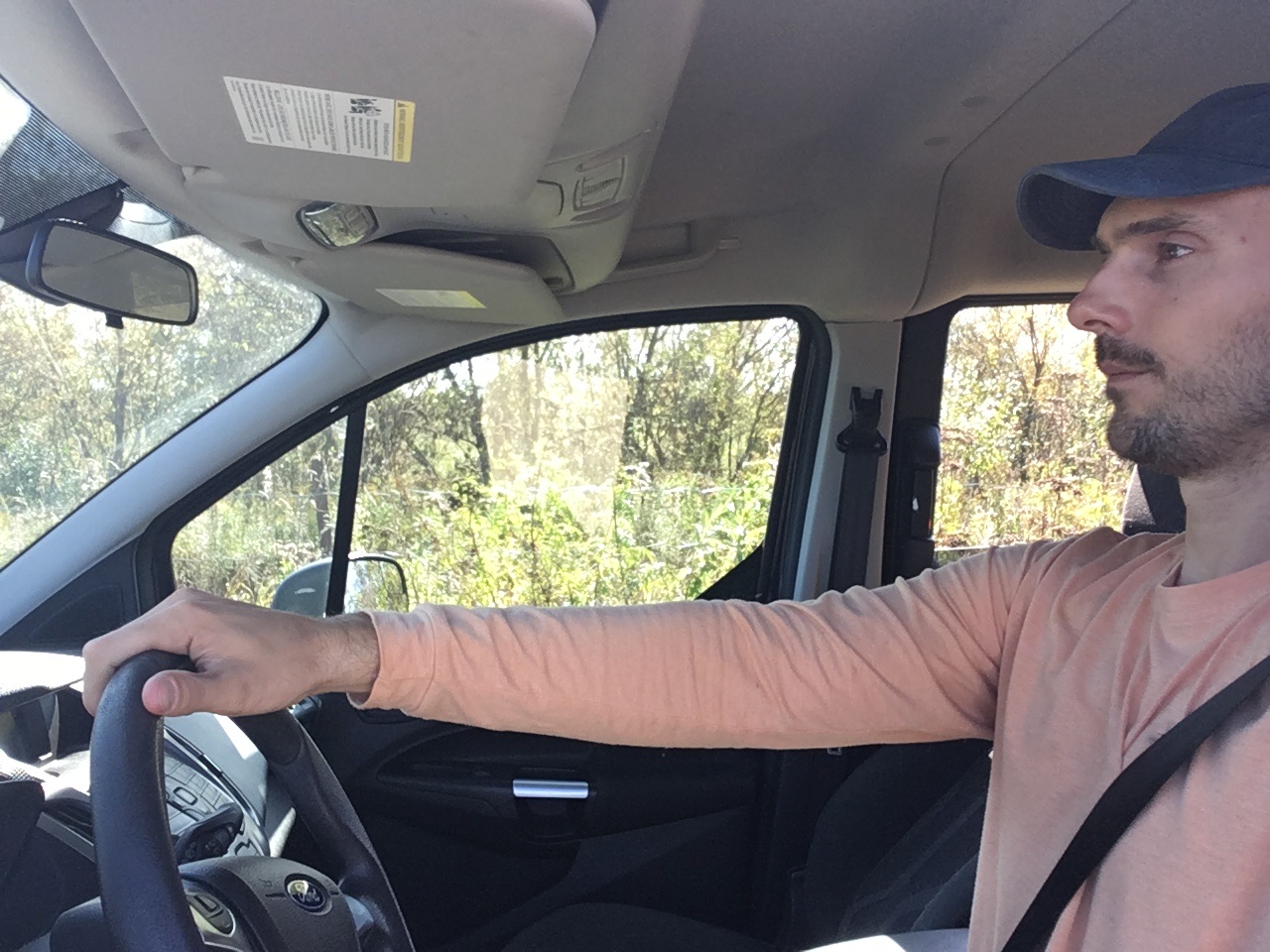 This means tall people not only have headroom to spare, but visibility is dramatically improved: 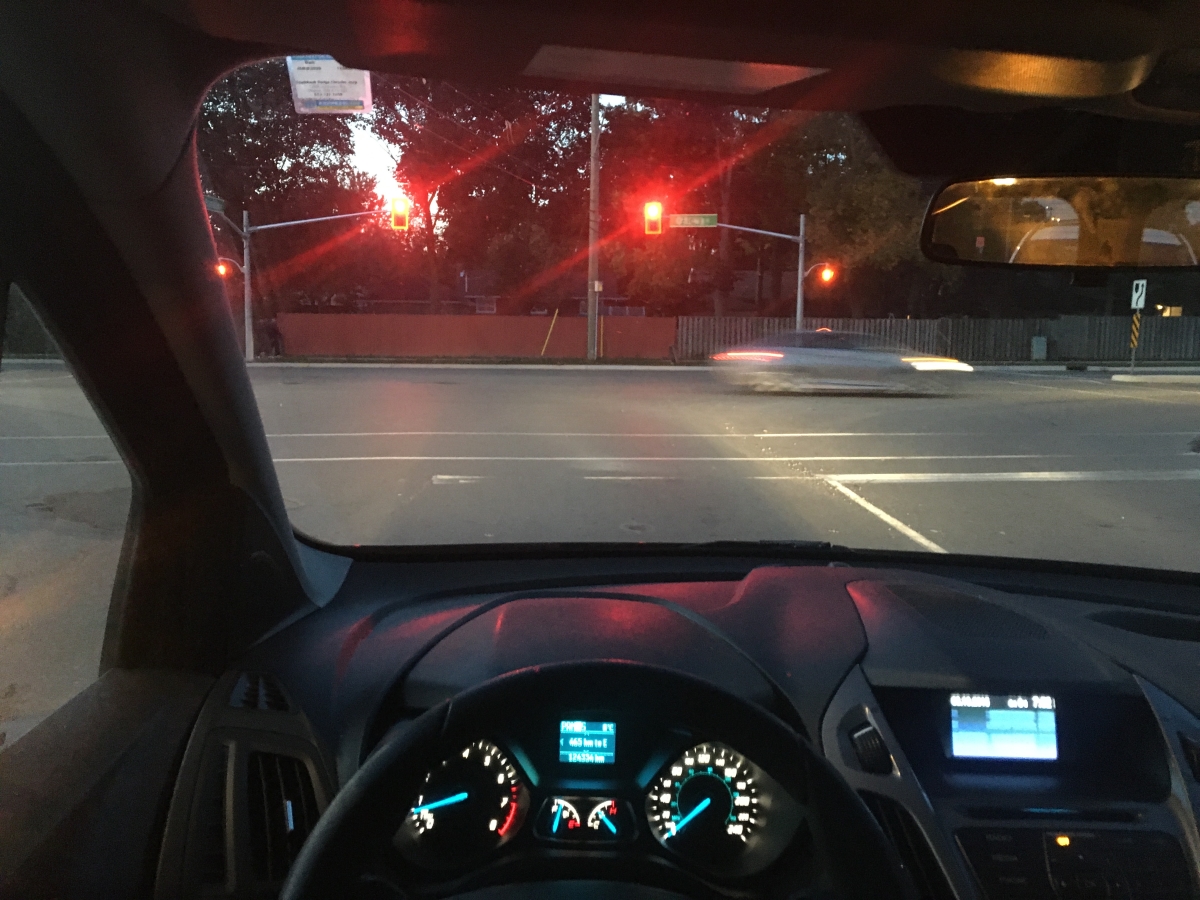 All the extra vertical space also means it is much easier to get in and out of the vehicle. And, unlike most vehicles, the headroom is actually just as good for the rear passengers. This makes it a great vehicle for tall families. Though I will say the legroom for the back seats isn’t very good when the front seats are pushed back all the way. But that’s the case for most cars.

As far as the legroom for the driver, it maxes out around 42″. While this is pretty decent, there are cars out there with much more legroom. However, there are ways to modify seat rails, which isn’t the case for the cabin structure. And if given the choice to have a cramped spine or cramped legs, I’ll choose the latter any day. Also, I find that the Transit Connect has so much vertical space that I feel comfortable raising the seat a bit, which allows the seat to better support my thighs, making it more comfortable.

Other Vehicles Similar to the Transit Connect

Since the Transit Connect’s inception, we’ve seen other manufacturers put out similar shaped cargo vans and, in some cases, they also did passenger versions. So, before buying a Transit Connect myself, I tried them all out. I was shocked to find that, while appearing quite similar on the outside to the Transit Connect, all had significantly less Vision Line Height.

But Who Wants a Cargo Van in Disguise?

A glaring issue I have left unaddressed up until this point is the fact that not every tall person wants to cruise around in the same type of boxy vehicle that delivers their Amazon packages. Further, it may fall short for other criteria such as fuel economy, all-wheel-drive, ground clearance, towing capacity, acceleration, and so on. But for me, everything else is of lesser consequence compared to insufficient vertical space.

And I actually like the fact that it is a big boxy vehicle. It can carry all kinds of bulky objects around. And I’ve got plans to turn mine into a mini campervan. Yes, I can actually lie down fully stretched out in the back! 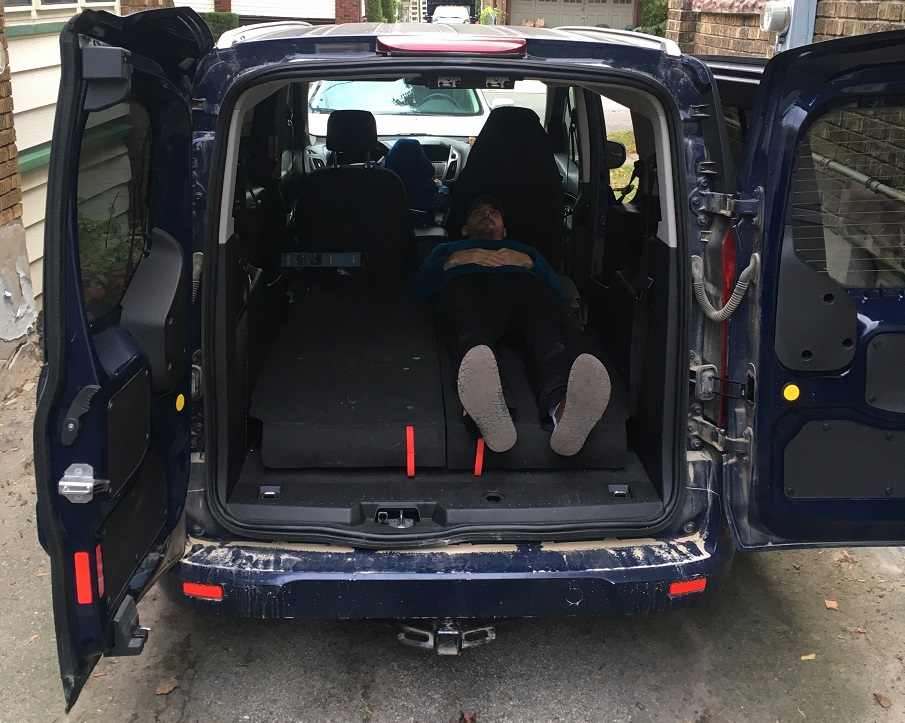 Features a Tall Driver Should Consider in the Transit Connect

As a tall driver, there are some specific options you should look for if you decide to get a Transit Connect. 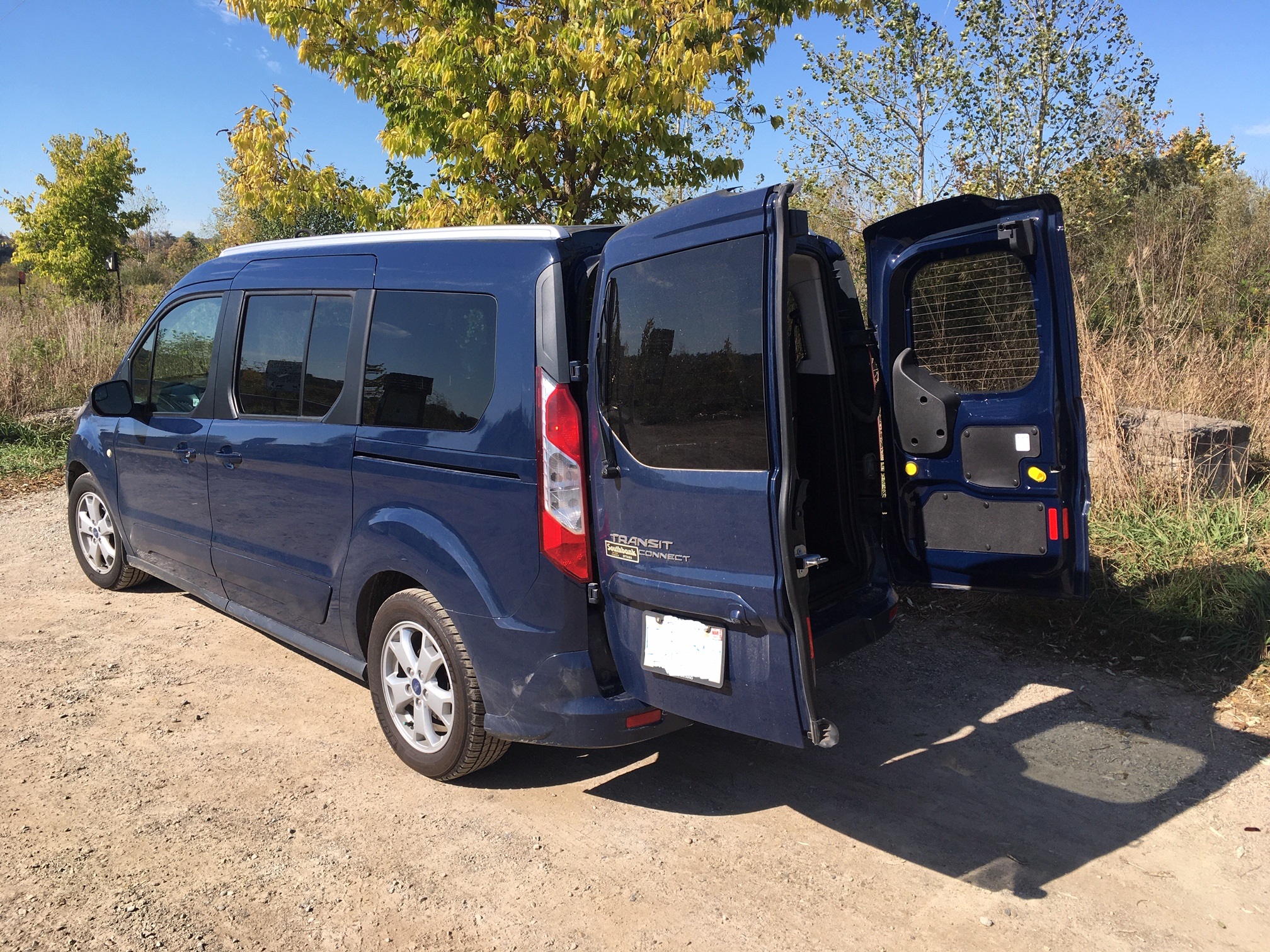 The Future of the Transit Connect Passenger Wagon

Ford Transit Connect Passenger Wagons are a rare sight (buying used is so difficult I actually had to get mine from a city six hours away). You would think this would lead Ford to discontinue it. However, keeping it going is only an incremental expense for Ford given the cargo version it is based off of is selling well. So I think there is a good chance the passenger version will be the top car for tall drivers for years to come. 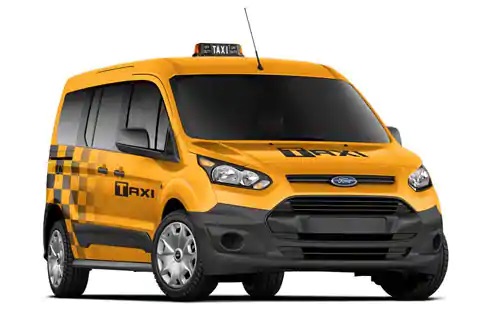 There is even a hybrid taxi Transit Connect which will likely lead to a hybrid passenger version too. This is fantastic as so far the electric car options for us tall people have been limited by the fact that electric cars are optimized for efficiency and thereby aerodynamics rather than vertical space (side note: the panoramic windshield is actually pretty great on a Tesla Model X if you’re only kinda tall).

Something else we have to look forward to is autonomous cars. Deficient ergonomics caused by our extreme heights become much less of an issue when a computer is driving. With the recent addition of adaptive cruise control and automatic braking, it appears Ford might be taking the Transit Connect along the path to full autonomy some day. I’ve got my fingers crossed.

I strongly encourage all tall drivers in the market for a new car to at least sit in a Ford Transit Connect Passenger Wagon. For a moment, forget about the various other criteria you’re after and instead simply appreciate the fact that you can sit up straight and still see the sky. I’m certain you will be impressed. 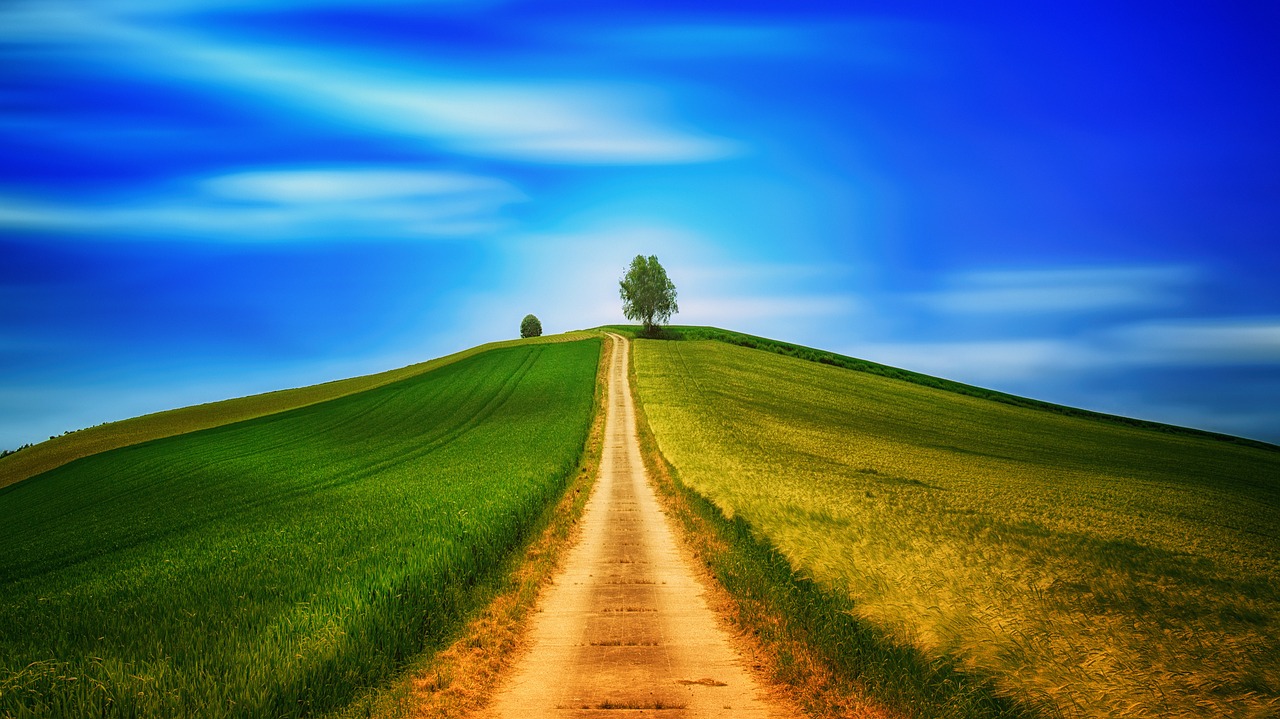 For eight solid years the Honda Element reigned as the champion car for tall people. Alas, like all good things, ...
Read More

If you're searching for the best cars for tall people, you've come to the right place. This page covers the ...
Read More

Of all the height biased man made objects, cars are perhaps the most problematic. The one size fits all approach ...
Read More 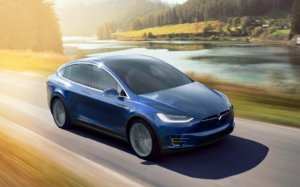 Electric cars have been gaining a lot of traction lately. It seems like most major manufacturers are taking a crack ...
Read More