How’s the weather up there? Windy, as it is for everyone here in the Windy City. We stayed for a mere two nights in Chicago, yet saw and did plenty, of which I’ll try to keep to the tall relevant stuff.

The Loop, Chicago’s business district, is rather tall. Pedestrians find themselves in a dark grid of columns, only glimpsing the sky upon tilting their heads way back. Given the posture related neck pain I’ve been having, I decided I needed a better vantage point. The 1730′ Willis Tower, once the tallest but now the 8th tallest free-standing structure in the world, most aptly provided this point.

An elevator to challenge Willy Wonka’s shot us up the 108 ear popping stories in about a minute. Once at the top, visitors were invited into a glass box known as the Ledge that made you feel like you really were in Wonka’s glass elevator. I refrained from stomping, unlike
the bloke after me; apparently that glass once shattered! 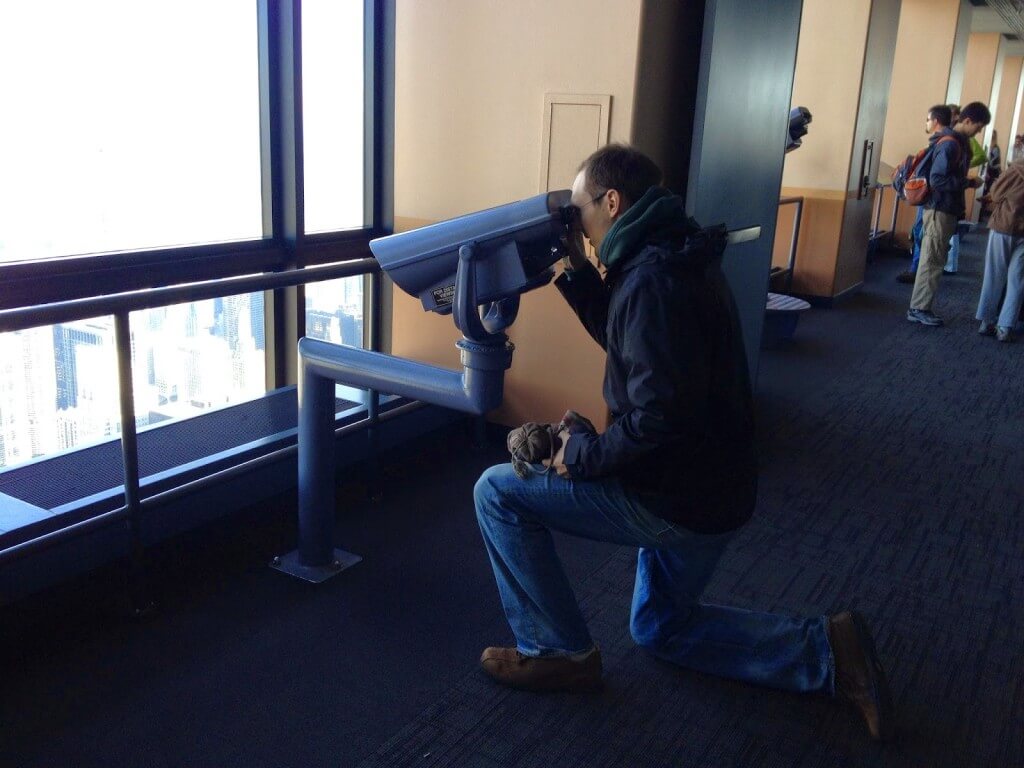 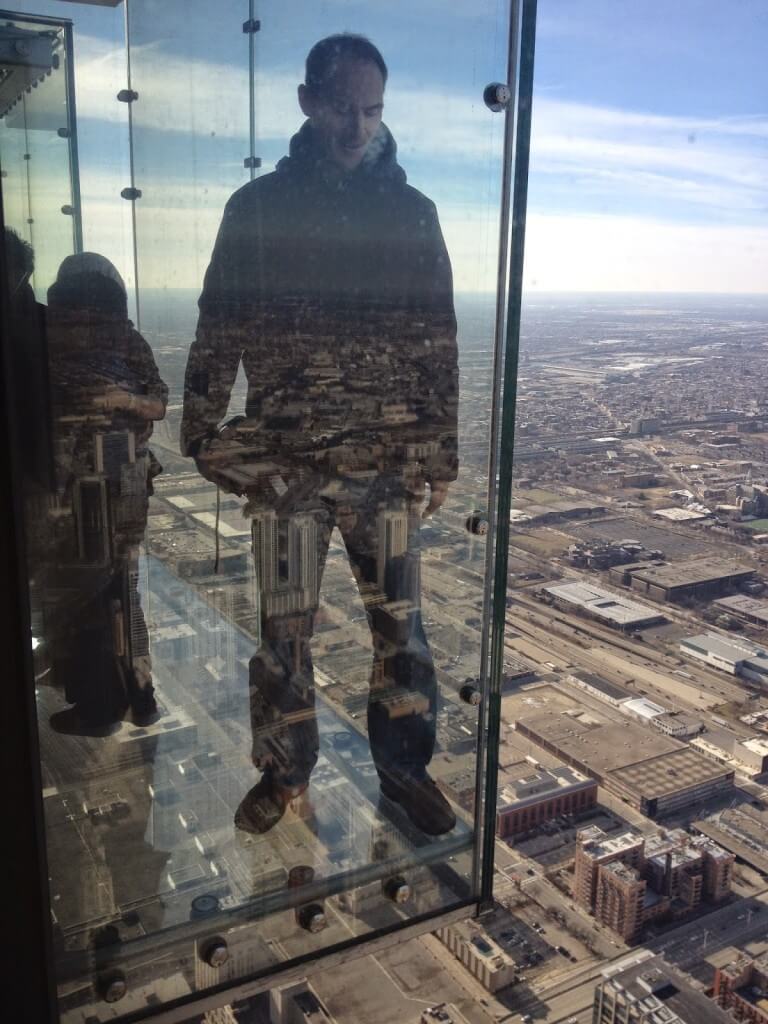 To help visitors grasp the height of the tower, a poster suggests stacking up 262 Michael Jordan’s. Given the one thing I have on Jordan is one inch, it would take about 259 of me. 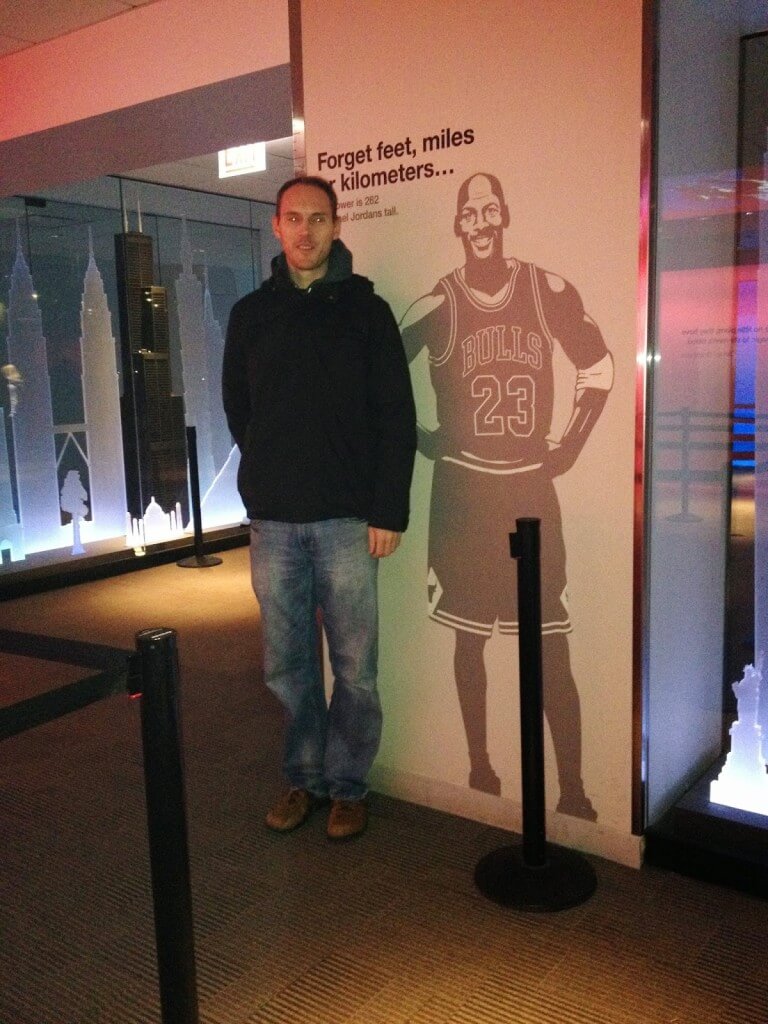 And speaking of Jordan, we also got out to see the Chicago Bulls play at the United Center. Sadly, I forgot to pack my Bulls hat I’ve preserved all these years… 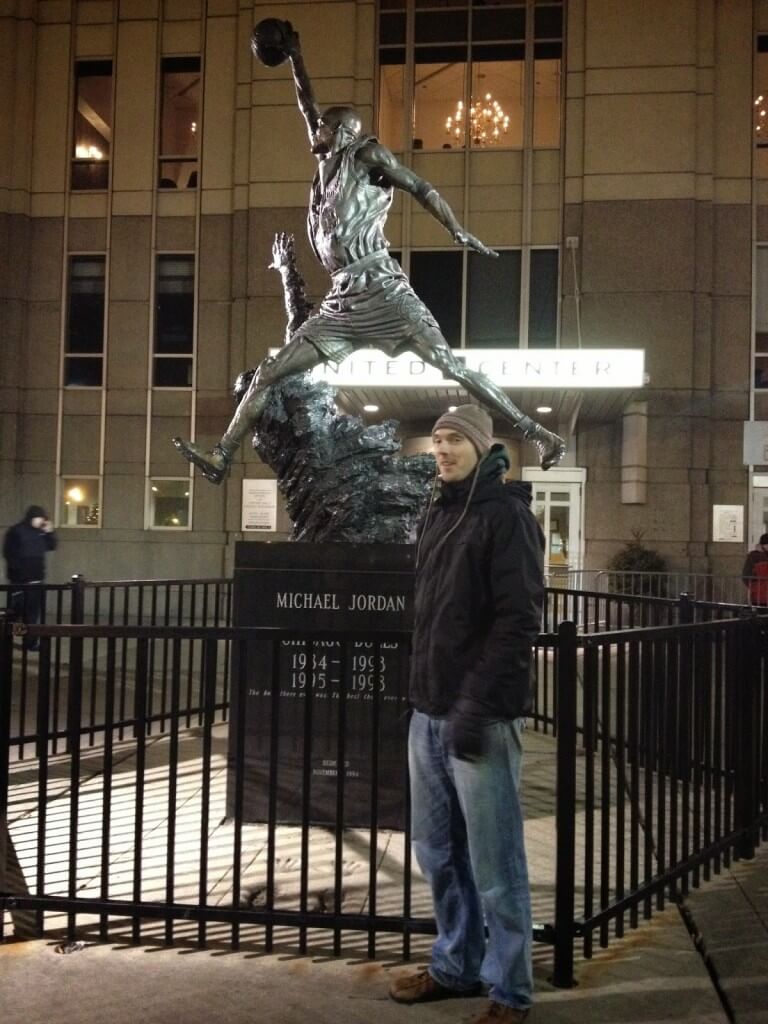 On the second night we stayed at the Central Loop Hotel, which, as you might have guessed, is located in The Loop, the heart of Chicago. While others might have most appreciated the character or class of the place, it was the adjustable height shower head that did it for me. 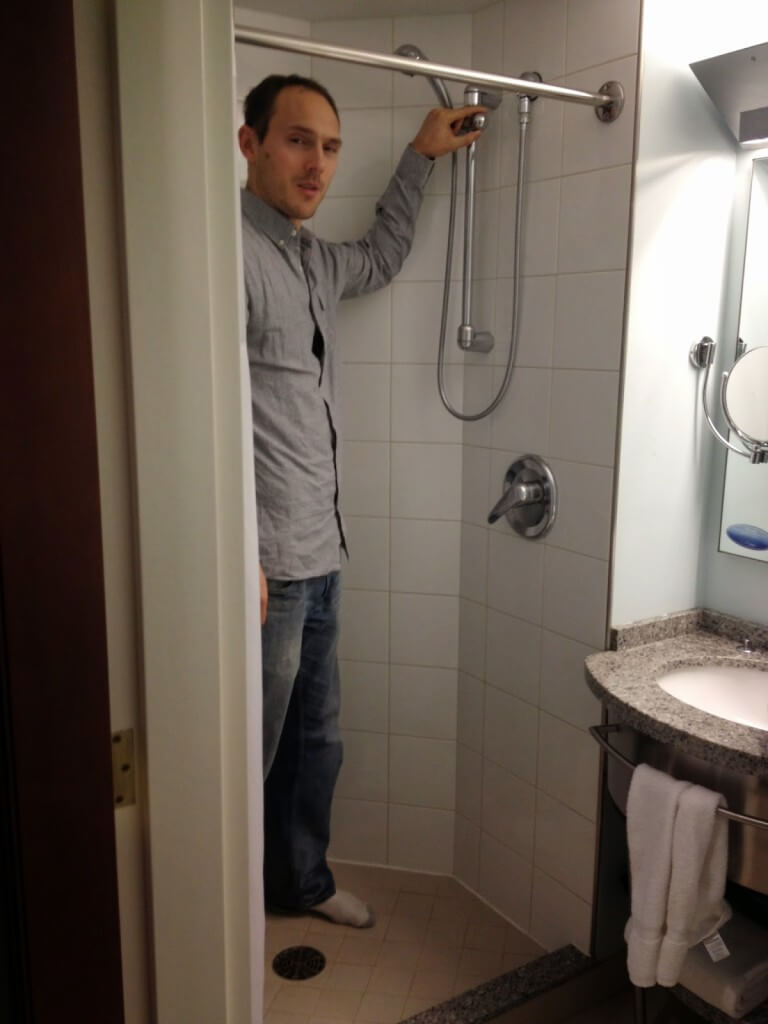 I’d have to say my favorite part of the trip was the Field Museum of Natural History. We were lucky enough to visit while the biomechanics exhibit was on and there was so much tall relevant stuff that I have to save it for a separate post. For now, check out the below shot of me trying to pet Sue, the largest, most complete Tyrannosaurus Rex specimen unearthed to date. 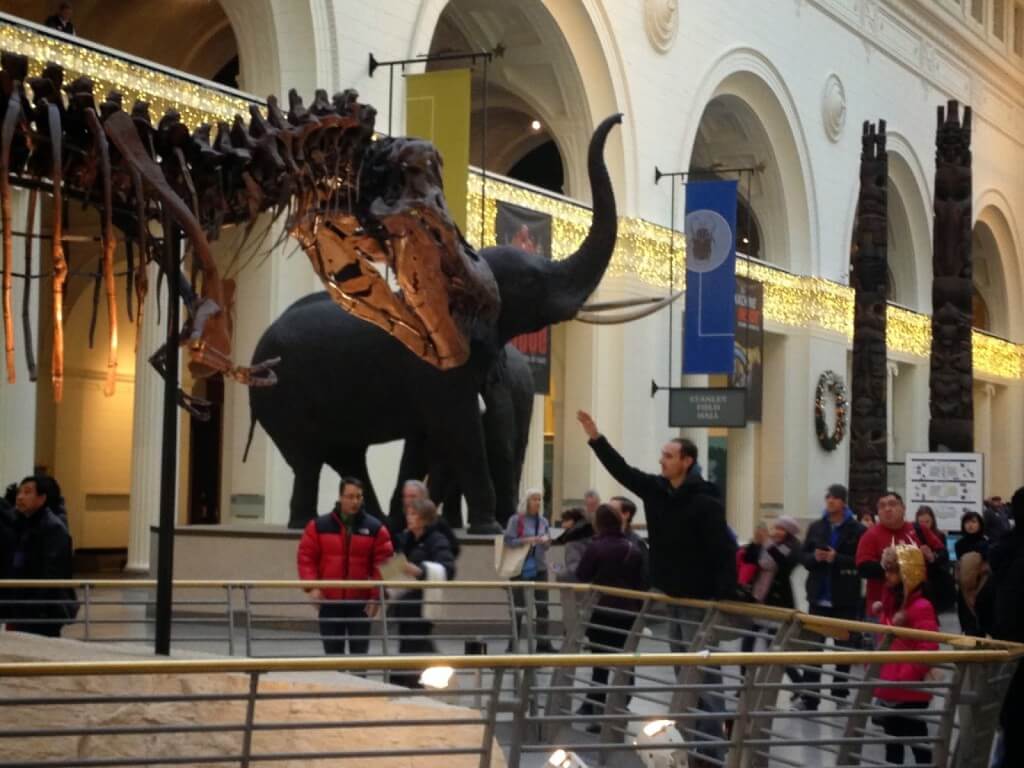 Though I found Chicago tall, the sentiment was not reciprocated. Not once was the ‘how tall’ question popped. I did however, on three separate occasions, get asked by fellow tourists to take some aerial shots. But they kindly returned the favor, as exemplified by the below pic of our mandatory Bean visit. Then I took the closeup (no selfie stick required). 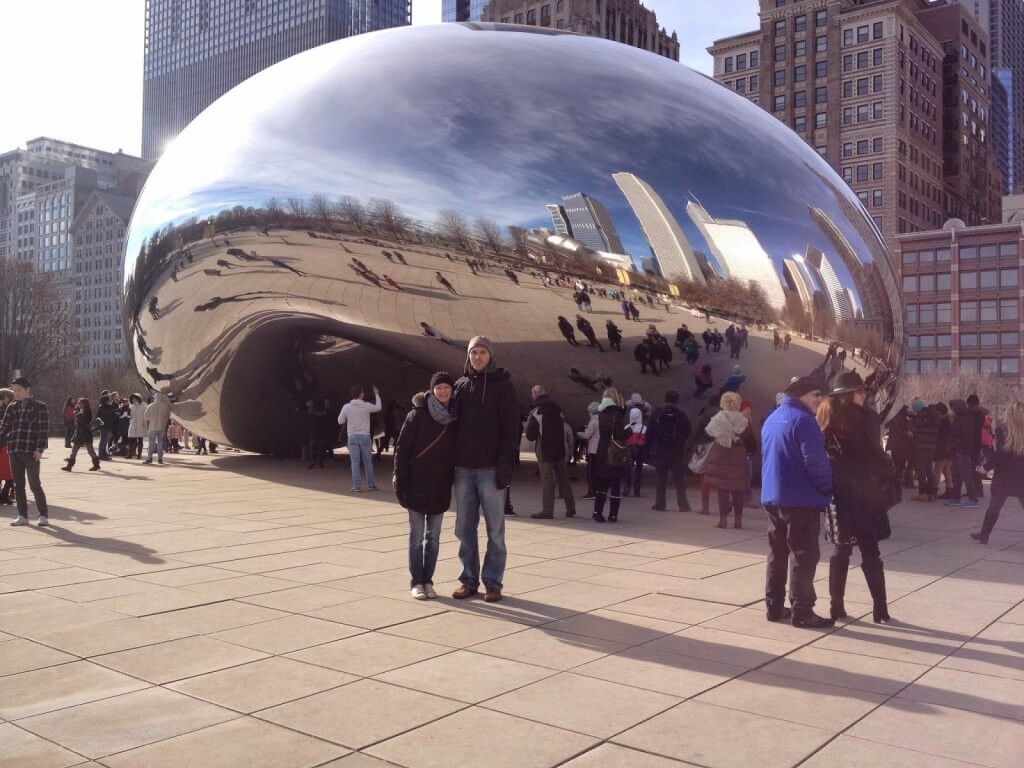 And what is a Christmas trip without driving through some winter weather? An onslaught of freezing rain nearly doubled our return trip time. Most frustratingly, the windshield wipers refused to clear the top few inches on which I humbly depend. I have a feeling this is common, given the central connection point typical of wiper blades. But praise our good fortune, we did not join the ranks piling the ditches. Take note, in the unwisely taken picture below, of the Fresnel lens at the top right of the windshield of my Honda Element. That was most handy for seeing traffic lights in the unfamiliar city of Chicago. 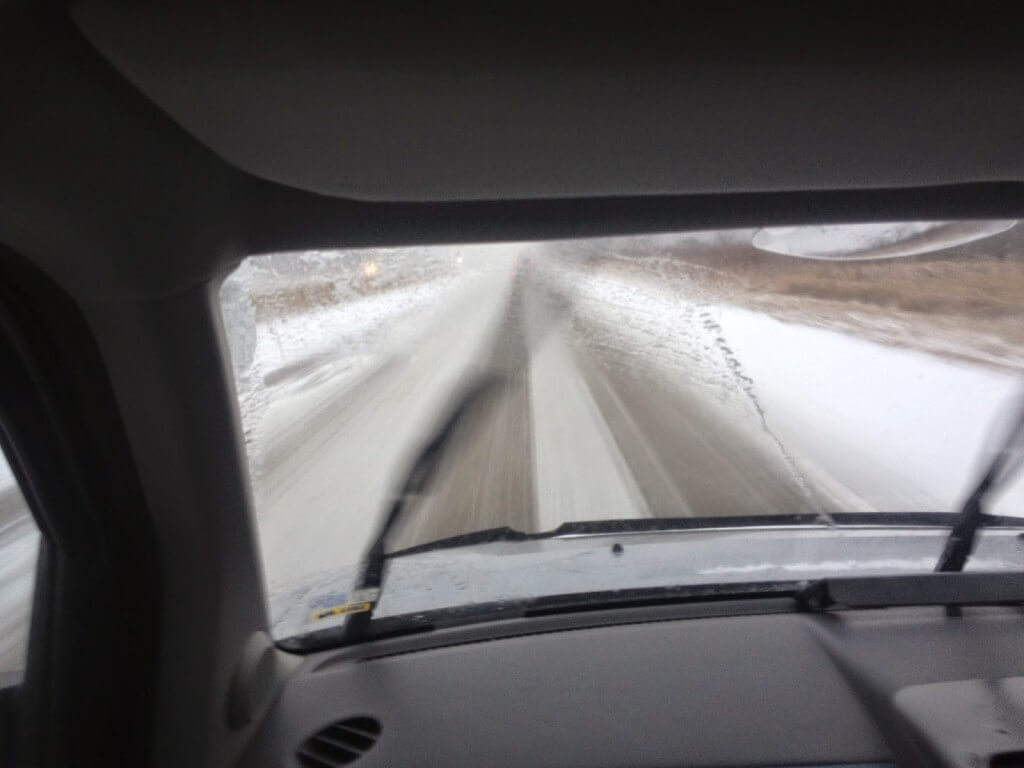 Alas, as the city was tall, it made me feel small, and I was happy to go back home. 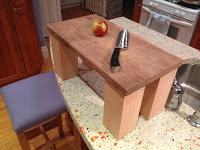 Some Christmas Gift Ideas for the Tall Person

Tall people are more likely to suffer back pain, right? You hear anecdotes all the time and countless websites make ...
Read More

If you are tall, and particularly if you are also heavy, you are more likely to sprain your ankle: A ...
Read More

Tall People Have More Sprained Ankles, Especially During Basketball and Volleyball or When Wearing High Heels

Picture this: You're taking a rather long flight to Timbuktu. You've finally gotten through all of the airport protocol and ...
Read More