All things considered, the three tall specific men’s clothing brands I follow have done amazingly well this year. In this post, I’ll summarize their 2020 updates as well as the sales they are putting on for Black Friday.

American Tall’s sale is at least 20% off site wide with some items up to 50% off.

American Tall has ratcheted it up yet again this year, launching an entirely new line of rugged tall men’s clothing. It’s called Long John and Son’s. You’ll find western denim, twill work shirts, detailed knit sweaters, and lots of plaid and flannel. Sizing includes both tall, and extra tall. They’ve also expanded many of their other collections, including the tall women’s clothing line they launched last year. There is so much new stuff they’ve had to move into a new space just to be able to stock it all!

Navaslab’s is putting their entire inventory on a 30% sale from Black Friday through to Cyber Monday. They will also have some daily special sales too.

Navas continues to push forward on sustainable tall men’s clothing with a West Coat style. Manufacturing is done in British Columbia, and most of the cloth milling in Ontario, Canada. Being Canadian myself, I appreciate this. I also really just like the way their clothes feel. They’ve got this dense and luxurious drapping going on unlike any other clothes I’ve handled, tall or otherwise. This year they’ve added mostly to their shirts and t-shirts collections, but also launched an awesome hat for big heads (yes, we tall people tend to be big-headed) that is my go-to-hat now, as well as a face mask given the times.

Tall Slim Tees is now manufacturing their namesake classic crew neck t-shirt in the US. Surprisingly, they’re priced only fifty cents more than their originals from China. I’ve tried one and it had the same perfect fit as the original, and the fabric feels somewhat stronger. Also this year they’ve partnered with William Mahoney to release a line of 100% cotton dress shirts. They follow the same principle of Tall Slim Tees’ original for accommodating tall slim builds.

Tall Slim Tees actually isn’t putting on a general sale this year. They haven’t been able to get enough stock together to meet the expected increased demand this season for that. But full price of $23 is incredibly cheap for their high quality t-shirts. The original they sent me a decade ago, which I’ve worn a lot, is still in great shape. I suggest grabbing some quickly before stock dwindles.

That’s all for this year. If you get a chance, drop these brands a line to say thanks. It’s all to easy to forget what it used to be like for us tall slim guys to find clothes before they came along!

There are clothes that look good and clothes that fit good. For us tall people, these rarely go hand-in-hand. It ...
Read More

Please enter a height into the height calculator below and press the calculate button. Please note that the results are ...
Read More

Have you ever noticed just how much footwear increase your overall height? Large sizes and boots in particular commonly add ...
Read More 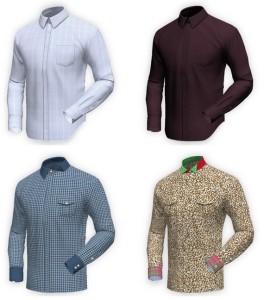 Though there are places to get stock tall men's clothing, the selection is somewhat limited and some sacrifices for fit ...
Read More